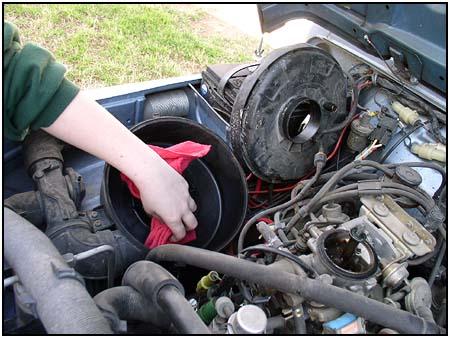 Ahh, fresh recruits to help me out. The Big guy pulling off the front bumper is Danny (recently bought his own Samurai) and his brother Jonathon (in the fancy clothes) pulling out the blinkers. “Look Ma, no wheels, shocks, sway bar, axle, etc…”

Look new springs. These are a set of hybrid rear springs. They are made up of post 88.5 mains and a mix of whatever else I had sitting around at the time. To put the main springs up front you will need to modify your spring mounts, or use the popular folding shackle. This particular folding shackle was a first prototype produced by

Petroworks some years ago. This is the third Samurai they have been mounted on. Now that is recycling!

Bolt in the shackles (don’t forget to flip that spring pin if you haven’t already) and slip the axle in place. (I lower the vehicle onto the spring pads… A little easier then raising the axle to the loose springs.)

OK, I didn’t clean the old shock up for the picture.. I had to pull it out of the back of my Geo Tracker. (Gee it’s fun driving a coil sprung vehicle without rear shocks!)

Hooked up an old Z-link. This one has seen better days, so Brent at Trail Tough will have a new one for me at Moab.

And there you go.. Sitting a little tall in the front. The stock springs and shackles have the rear sitting a little low for now. Don’t forget to bleed those brakes and check all those bolts before driving it around, I did! I found two shocks not bolted in.

Since my helpers for the day decided they really liked my front bumper, they drove off with it, so a quick call to Brent, and one will be waiting for me at Moab.

Next was removing the doors. Since a lot of new owners ask questions about this, I thought I’d take some photos as best as I could with just one hand. Here are the tools I used. The thing on the left is an impact screw driver. You can get them for about $6 at Harbor Freight, and it works great.

I start off by trying the impact on the screws. Simply use the large phillips bit that fits the head nice and tight and then turn the impact handle in the direction you want the turn the screw. Then hit the end of the driver with a big hammer. But be careful, you can bend the sheet metal if you whack it too hard! (Trust me on this one.) If you don’t care about dents, then swing away until you get the sucker out. If you want to keep a clean Zuk, then give it a couple of good whacks and see if any come loose. Usually one or two will start turning. Have some that didn’t turn? Then its time for the chisel. Point the chisel straight toward the center of the screw and hit it several times with a smaller hammer…

…until you have a nice dent in it.

Then drive the chisel at an angle to the head to unscrew it. Here you can see that the screw has already turned. Once it moves a bit, you can just unscrew it with a normal screw driver.

OK, enough of that door stuff for now.. How about some t-case stuff.. Nothing fancy here… pull the shifter out first, then go below.

Then unbolt the drive shafts and unplug the 4×4 switch and pull out the speed-o cable. I also suggest you drain the oil while it is still in the vehicle. Then unbolt the rubber mounts and pull it out. It isn’t all that heavy. For a side by side comparison, the stock t-case is on the left still bolted to stock mounting arms, and on the right is an older unit with lower gears in it,

Here is another picture of just the Mighty Kong t-case mount. I installed the t-case rubber bushing mounts and gave it a test fit, and it dropped right in.

Mounting the t-case into the Kong was TIGHT. I had to play with it a bit to get it in there. Don’t forget the lock tight on the threads. It does take a bit more muscle to get the t-case back in place, but if I can do it, you can to!

About this time in the project a couple of things started to occur. First the battery in the camera died, then I discovered I couldn’t locate my drive shaft bolts and it started to rain. So I cleaned up the tools, and moved inside the Zuk and installed the CB and the cup holder. I have been asked many times what the first mod to a Samurai should be. My answer is a cup holder! 🙂

When I got things to a drivable state, I quickly discovered why we had a spare geared t-case. Dead bearings! So back in with the stock, and a frantic call to vendors to see what I could get. Sure enough, Trail Tough was willing to bring me out a geared case. Petroworks was already bringing a number of their cases out to their customers also.

Still lots of work to do, and only a little time left to work on it. And instead of working on it I’m writing this up, and trying to get over a little Flu. Ahh… will I make it?

Did I mention the cup holder?