The idea of using multiple shift levers in a transfer case is as old as the hills. Until recently, you could find them available for almost any brand of 4×4 out there except a Samurai… Although a few adventurous out there built there own versions, there has never been a set that could be had out on the market. Until now.

Rock 4XFabrication is providing a place for Troy Martin, designer and fabricator of the twin stick to sell his work. Scott Yach, owner of Rock 4X Fabrication has designed and produced a trick shifter boot assembly that works with it to make the whole thing viable for the shade tree mechanic to install.

But before we get to the fun stuff, one change has to happen within the stock transfer case to make it work. The stock shifter system is designed so that only one rod (inside the case) can move at a time. One moves a certain way, stops, and then the other can move. This is controlled by a small ball bearing (detent ball). That ball must be removed so that the two new sticks can move independently. The problem is the ball is in the center of the case, and can only be removed by pulling it apart.

The small track that the ball rides in is accessible from the outside of the case, but the detent ball we need to remove actually lives between the rods. So one of the rods must come out to let the ball free. Click on the photo to the right and you can see the opening of the track down inside of the larger hole where one of the shifter rods live.

If you are not comfortable rebuilding a transfer case, then you need to take it to someone that is. After you have done it a few times it seems easy, but for the rookie mechanic it can be a very daunting task.

Once that is all put back together again, we can concentrate on the ‘sticks’ at hand. As you can see, the guts look a bit different. Instead of using a ball and socket configuration (using a rubber/poly shifter sheet), the new shifters us a single plane of movement. Each one moves forward and back independently. Instead of moving back and forth between the two shifter rods in the transfer case, each one has its own rod to manage. After removing the old shifter sheet from the opening, the new component slides right into place.

The boot assembly wil hold it in place, but you need to slide that assembly all the way down the sticks… As you can see, the front output flange is in the way and must be removed to install the boot securely. The next step is to make the straight sticks curve around the other components like the stock stick did. 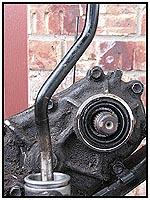 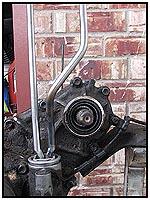 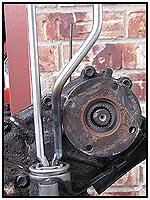 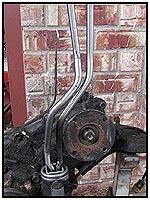 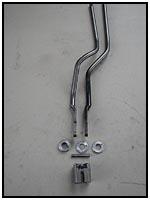 It is a tight fit, but with the help of a press, or some heat (if you have a torch) you can make it fit nicely. Make sure you leave some space so they don’t hit each other. It is also suggested that you space the top of the sticks out just a little because you still have to add the shifter balls on top when you are finished. It doesn’t do you any good if they bump each other and impede each others travel.

The final fitting and installation needs to be inside the vehicle to make sure everything fits just right. It is also easier to install the transfer case without the shifters, so it works out. Remember to leave the front output flange off for now until the installation is complete.

As the sticks go in you will notice that the shifting is now crisp instead of ‘wiggly’. the sticks must also be evenly spaced within the shifter opening. Use the drivers side shifter to judge position, you should find low, neutral and high gears. Make sure high and low both leave the same amount of clearance to the edge of the opening. If not, take them out and bend them a little more.

Add a ring of sealant inside the boot assembly to seal against leaks. The shifter boot slides down and gets secured with two set screws that hold onto the original boot depression. It is easier to tighten those down from under the vehicle.

One thing that is not included in the ‘kit’ is an interior boot. Here we have taken a Dana 300 twin stick boot (available from most 4×4 accessory stores) and inserted it from underneath up into the original Sami boot after trimming the Sami boot at the top of the first accordion fold. We then trimmed the 300 boot where it extended past the hold down bracket. we also applied a a good helping of sealant (black) into the joint from underneath to get an airtight seal.

Bolt it to the floor and then you are done. The drivers side controls your high/low and the passenger side controls the 2wd/4wd. Yes, now you can use 2wd low if you need to. Cool.