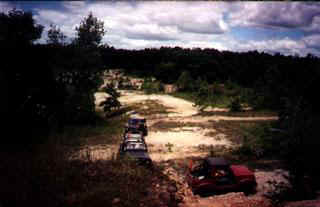 This is the third installment of a multi part article. Many of the attendees have given their thoughts on the weekend and we share them here with you.

Before we broke for camp, there was the RTI competition on The Badlands’ 23-degree ramp. One by one, egos were inflated, or in some cases, severely deflated. Instead of measuring the “right” way with a plumb line and all that, we just measured how far each rig went up the ramp forwards and backwards, then averaged the numbers. Bob Norman’s “Killer Bee” beat out Troy Graham’s “Mazuki” by one inch! (83″ vs 82″). One Samurai owner showed us why nobody runs Trailmaster lift springs with a 40″ showing, a full 4″ LESS than the two STOCK Sammies managed! So now it’s time for the award ceremony. Troy had come up with 4 awards for this First Annual Midwest Zuki Melt: The “Limp” Award: Best RTI scoring: Bob Norman  The “Stiffie” Award: Worst RTI scoring: Dennis Stroot The “Rash” Award: Most body damage: John Acuff The “Dana” Award: Most drivetrain shredding: Matt Evans It should be noted that the “Dana” Award is in fact named after Dana Whittenbaugh, who, at of the time of the ceremony, still had an operating vehicle. If we had included the night run in our evaluation period, he likely would have won his namesake award! 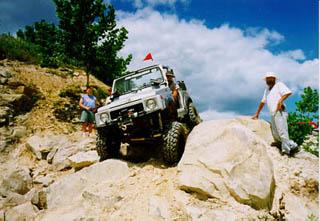 “…Well, good ole Mr. Murphy got me good on this trip. DOH! I don’t think anyone else trashed as much stuff. Here is the list. Shortly into the first trail, the right rear corner got sucked into a tree, and before I noticed it the end of my Hi-lift got snagged and the beam got bent. Throughout the rest of the day, noise from u-joints got progressively worse, (and I) ended up changing both joints in the rear driveshaft before the night run. Today, I finally got around to finding out what broke in the front axle during the night run. The long side axle shaft broke at the splines where it slides into the diff. I haven’t pulled the short side or the diff yet, but hopefully nothing is damaged in the locker. I guess I’ll find out tomorrow when I pull the rest apart. I knew I couldn’t be the only one who got into the poison ivy! No matter how careful I am, I still manage to get into it… DOH!” – Dana Whittenbaugh 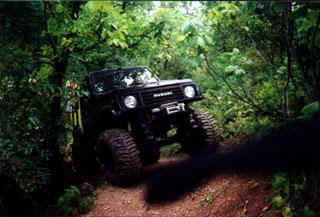 “…I had pre-arranged for a night run with Troy Myers and a few of the locals, and specified an “extreme” rating. Oh, did I mention that Troy has a “Sniper” vehicle, built by Avalanche Engineering that he’s gonna lead us with?” – TD (Troy) Graham 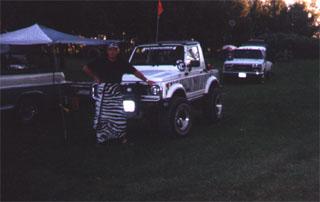 Of the 8 or 9 Zuks that decided to come along, one bugged out on the first WAY steep hill, deciding that being able to see the spot your rolling over into is important! We started on what is know as the “Barbed Wire” trail, because there’s a new barbed wire fence that you can slide into if it’s wet and you’re not careful. But soon were off on a detour that dropped us into a rutted wash full of logs to bounce your drivetrain over. From there, it drops down into the creek, but that’s a trick in itself: The steep descent actually turns to the to the left and drops 8 feet straight down, but in order to make the turn, your tires need to kiss a tree on the right side, and you MUST let off your brakes at the right instant, or your back end will bounce off the tree, and you’ll roll down the vertical drop sideways. I saw this very thing happen once before, but of those that tried it, none rolled. 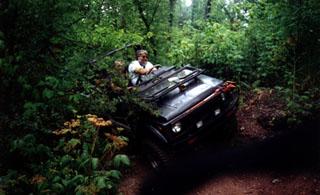 I have to start off with saying one word, “AWESOME!”  I didn’t have my rig there to wheel but I still had a blast!  I had the chance to ride with several zook owners on the trails and boy did I get the serious itch to get my tail in gear and finish my rig! Before I say anything about the night run let me just say “thank you” to Troy (TD) Graham for putting this trip together and “thanks” to Larry and Terrina Harris and Shaun and Lisa Taylor for the great food which I devoured over the weekend!

Like I said the trails were awesome and you really had to be on your toes to maneuver through ’em, but at night they are Totally Awesome!!!  We headed out towards the front of the Badlands property and turned right onto the first trail.  From then on it was wild.  Head lights – taillights – brake lights – NO lights! At night you don’t know what’s coming up next.  One of the wildest parts was when we saw taillights and then they were gone.  “Where did they go?” exclaimed Geoff Taber, I don’t know and just as fast as we came up on the answer?straight down into a deep ravine.  Hard left and “WOW” we just dropped off into a creek bed or something like that?COOL!  A lot of tight twisty areas, off chamber spots, rocks, roots and ruts now this is wheelin’!  Taber says “Hey man, I like this trail!”

Another spot on the trail was towards the end of the run was another steep downward crawl with an off chamber spot, a hole and what seemed to be no bottom.  This time I got out and spotted for those few that were brave enough to attempt it.  No casualties and we were through.

I guess the only way for anyone to know the great feeling of the EXTREME Pucker Factor, EPF for short, is to go to Attica and just experience it! 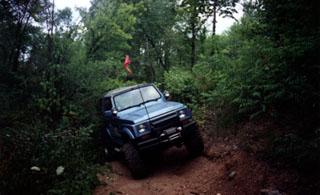 When we popped out of the creek, Dana managed to pick the wrong line, and in the process of trying to tug him up the near-vertical bank, a front axleshaft let go with a POW! Since Troy’s the local on this trip, he led Dana and Kevin back to camp and waited for the others to trickle in. When Bob Norman showed up, he filled us in on the details: After the creek, they went to play on the rocks. He was coming off a good-sized pile of rocks, slightly off-camber, when one of the rocks rolled out from under his front downhill tire and over she went! And to add insult to injury, in the process of putting the Bee (a hardtop Samurai) back on all fours, they managed to push the roof in! 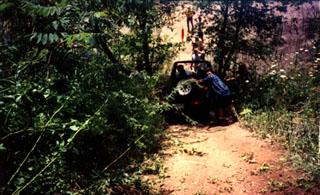 Most folks headed for home Sunday morning, likely preferring to quit while they were ahead (read: can still drive the thing home!). After a quick and greasy breakfast at the “Red Barn” Restaurant, Geoff Taber, Kevin Lindamood, Shaun Taylor and Troy Graham decided to tackle the fabled “Orange” trail, sans King Kong Mud Pit. “…When this trail opened in April, for the Superlift 4×4 Adventure Event held here, it took our quite capable convoy of a dozen or so vehicles nearly 5 hours to negotiate. It had been raining for a solid week, and was so slippery you literally could not hike up some of the hills without losing your footing. Our trail leader’s CJ-7 on 35″ Boggers was the only one to make it through the pit without a strap or winch. I had mud coming in OVER the tailgate, while I was waiting for someone to strap me out. The rest of the trip saw two rollovers and mucho breakage. But what a difference no rain for a month can make in a trail – Neither Kevin nor Shaun had a locker, and we finished the run in a little under 3 hours. Piece ‘o’ cake, baby!” 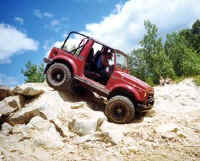 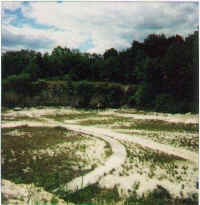 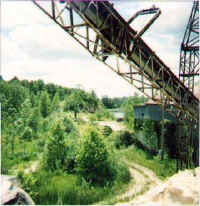