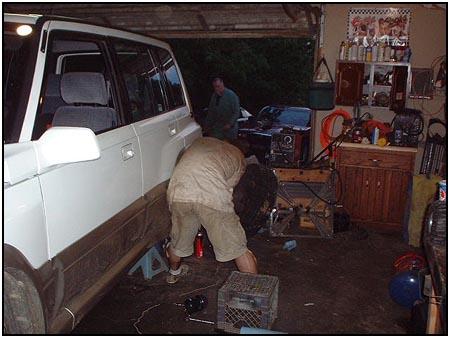 Tim Porter, Jeff Chester and myself figured that we would hit the Badlands Thursday morning and do some last minute testing of our rigs to work out any bugs we may have but little did we know that Troy Graham, founder of the Zookimelt, already had plans for us! Together with Bob and Michelle Norman in the “Killer Bee” we were to head out to mark the “Pink” trail for the melt! Well this ought to be a good way to test our rigs for bugs. Loaded with trail markers and spray paint we headed for the trail!

We drove the gravel road to the beginning of the run where we had to turn right onto the trail. There were two good-sized holes filled with water so we proceeded. Our caravan was lead by Bob and Michelle, Tim Porter, Jeff Chester and myself. Bob went through the holes effortlessly followed by Tim and then there was Chester. His left front tire disappeared and all I saw was the undercarriage of his zook! We quickly abandoned our rigs to shoot pictures, of course, and then we lifted his zook right side up. He proceeded slowly until the next hole and boom there he goes again! Two dumps at the very beginning of the trail this would be a good trail. After we got Chester squared away it was my turn. So far so good!

We proceeded to work our way through the tight spots and move along at a pretty good pace until Tim started having some stalling problems. We had to push start his zook a few times but he was still able to proceed so we continued. Next was a little rocky field we needed to cross and thats when Tims zook died. No juice. Bob pulled him through the field and we went to work on the problem. After going through the wiring we had found the alternator wire wasnt hooked up so he had been running solely on the battery. Doh! After hooking the alternator up and letting the zook run for a little bit we were back in action.

The next obstacle “looked” like a nice dry washout up a hill but little did we know that at the top of the hill was a big old hole filled with water! After Bob crested the hill water came gushing down like a waterfall! Oh what joy! Now we get to climb the soaking wet hill. No problem, a little speed and all was well. We made a few tight turns and down a steep little hill and we were in the playground.

Since it was a playground we decided to play a little and do some posing! (Bobs idea!) We twisted up our rigs for a while and then proceeded to our duties of marking the trail.

Bob lead us up another section out of the playground through some more rocks and then we came to a sweet pile of rocks that Bob was determined to mount, I mean overcome. Bob was having some trouble with his rear suspension setup so the weight shift of his zook prevented him from conquering this obstacle. I give him credit; he hammered on it but was unsuccessful. He did come away with a dandy of a trail trophy, a big scrape down the side of his zook.

Next, we headed down into a creek bed area where the mosquitoes were hiding and followed the trail. As we were coming out of the creek there was a deep rut with a tree stump root on the right, which was extremely gooey, especially after Bob thumped on it! Chester took a bypass. Tim attempted the rut.

No luck, he got hung up on the root but he did like he always says, “Give her hell amigo!” Unfortunately the result was a lot of mud slinging! Chester quickly extracted Tim. I went next but I too caught that root and ceased forward progress. Not only that but I ceased rearward progress also! Chester, after laughing for a while, pulled me out. The only down side was that half my body was now covered in mud.

There were a few more tight turns and thats where Chester decided to take a bypass instead of taking the nasty little off camber turn. There was only one problem, where he went was a thick gooey section that stopped his zook in its tracks. I maneuvered around so that I could winch him out since there wasnt any place to use a strap. We got him out and proceeded to a hilly off chamber rock slab. This obstacle was nasty cause you had

to go across the slab at an angle to your left and then cut back right up the hill and with gooey tires it gets exciting. Bob made it with some scary leans and then Tim went next. Chester and I followed. I definitely liked that spot!;) It was an EPF (Extreme Pucker Factor) obstacle!

We proceeded up the hill when all of a sudden I heard the horrible clank of a driveshaft u-joint letting loose! I stopped to check out what had happened. Somehow the bolts came loose on my Dana 44 pinion clamp and I threw a cap. The u-joint was okay so I grabbed a replacement cap to fix it. In the meantime Chester and Porter had walked back to see what had happened.

Then came the call on the CB from Bob, “HELP, I need some counterweight quick or Im going over!” Tim and Chester ran off to help but told me put the cap back on so I could catch up to them. Tim said that when they got there Chester opened the back door of the Bee and grabbed a strap to wrap around a tree to hold him. Tim pulled his winch cable to pull Bob back up the ledge. After that we figured wed save any more breakage for the event so we headed back to camp.

To all that ran the Pink Trail, I hope you enjoyed it as much as we did. This is the type of stuff that goes on before a trail ride that people dont get to see so I thought Id share the experience with you! See what we go through to make the event so much fun? Hopefully, well see you at next years Zookimelt!