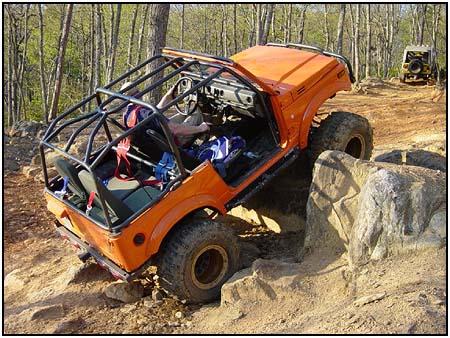 When we think of driveline problems, the most common headaches come from universal joints (u-joints) that give out at the worst times. If you are lucky enough to catch the problem early when you feel an odd vibration, then the problem can be fixed at home, in the garage, with a vise, where you can follow the Factory Service Manual (FSM), with a cold beverage…  but usually we aren’t that lucky.

Most of the time we end up hearing the ‘Klunk – bap bap bap bap… and pull to the side of the road (trail). Unfortunately this makes it a little harder to fix, and that’s if you had the foresight to have one or two new u-joints in the spares box. If you don’t have one and you are stuck on the trail, remember you have three drive shafts…  And you really only need two to get to where you can get another u-joint. If you lose a u-joint on the front driveshaft, just put it into 2wd and unlock the hubs. If the bad u-joint is on the rear or intermediate (tranny to t-case) shaft, you can pull the front shaft and harvest one from there.

If you want to pack along an extra driveshaft or three for a long trip through the Rubicon, make sure you pay attention to what you pick up. The two intermediate shafts on the left look identical, but on closer inspection you notice the flanges are a little different. The older (pre-88) models use a small bolt pattern. The newer Zooks use a larger bolt pattern with larger (stronger) bolts. Same u-joints, same shafts, different flanges.

The smaller flange pattern measures 2 3/16″ from bolt center to bolt center. It can also be recognized by the use of smaller bolts that use a pair of 12mm wrenches for removal.

The large flange pattern measures 2 5/16″ from bolt center to bolt center. Its larger nuts and bolts can be removed with a pair of 14mm wrenches.

Believe it or not, OEM (factory) u-joints are stronger than most of the u-joints you will find at your local auto parts suppliers.

So stick with those. We went to Trail Tough for some replacements. Brent sent out some Mitsubishi components that are OEM strong, but a bit less expensive but comparable to the Suzuki factory parts. The FSM says to use a Universal Joint Assembler (Special Tool 09926-48010) along with a bench mounted vice and a set of snap-ring pliers for this replacement, but when the timing isn’t right (see above) we can do it with a hammer, the snap-ring pliers and a pair of sockets. For this, we used an 11/16″ deep socket, and a 1″ standard socket.

First, we remove the circlips with the snap-ring pliers. If they are really in there and don’t want to budge, you can spray them down with penetrating oil (WD40) to loosen them up. You may also need a small thin screwdriver to help the lift out.

Using the large socket underneath, and the smaller socket up top, You can tap the bearing cap through and remove it from below. Go the opposite direction to remove the other side.

Tapping the new u-joint into place is as easy as sliding the caps in from the outside and carefully trapping the u-joint in the middle. Do not hammer directly on the cap with a steel hammer, you can damage the cap. The FSM says to use a copper hammer…  like we all have a copper hammer in the tools box! You can use the surface of the road or even the flat top of an aftermarket bumper. Tap the yoke with the hammer to force the cap into the other side. Then use the socket to sink the cap below the slot for the circlip.

After installing one of the circlips, be careful not to whack the socket too hard setting the opposite cap below the slot… you could damage the first circlip. Installing the flange side is basically the same. Just be careful not to loose the needle bearings.

A u-joint is something that we have to be able to install and take for granted. When it fails, it can take much more expensive components with it. A loose driveshaft can destroy the transmission outputs, transfer cases, and can even destroy vital fluid lines that are attached to the frame underneath. Make sure you don’t skimp on quality. And pay attention when you hear a strange noise underneath, or feel a strange vibration from one or both of the shifter handles. It’s much easier to change a u-joint than it is to empty the wallet for a new transfer case… Component Source: