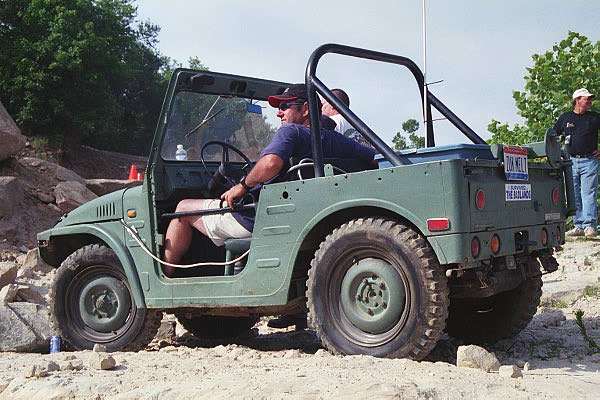 As some of you may remember in our pre-melt edition, Mom Murphy was getting ready to embark on her very first Zookin run. As many of you already know, Danger Dad Murphy has hit the trails with us on several occasions, so we decided it was time to bring mom out there too.

The weekend we chose to drag mom along (kicking and screaming) was the pre-melt run the day was spent preparing for the Melt, marking trails and making sure everything was as ready as it could get a few weeks early. The idea here was that this would most likely be the calmest trail run ever, perfect for a first timer who can write me out of the will at a moments notice. Mom and I had a chance to chat a while and reflect about the trip, and heres what she had to say SEASONED ROOKIE: What was your first impression of the event? You seemed a little on edge at first. Why is that?

MOM MURPHY: Unsettled is a good word. It all started back in Elmwood Park as we were getting ready. Your Dad would agree that I was a bit edgy as we were getting things together to leave. I had a dream the night before about race cars rolling over. All in all, I was not a happy camper. But, as we were entering the park, Bill said something that really shaped me up. He said that I had always been adventurous and what happened? And then we saw you and you had this huge grin on your face you attached the flag to dads 4-runner, introduced us to some of your crowd, and suddenly we were at the start of the trail!

SEASONED ROOKIE: I’m sure there was much “unexpected” on the trip — tell me what you liked the most that you had no idea you would enjoy. MOM MURPHY: I think that the camaraderie is a great part of the fun. Terrina put me at ease right away, and she and Larry made us both feel welcome immediately. Seeing that Geoff and Julie were taking a puppy in the truck with them I thought that if puppy could do it by gum so could I.

Laughing is a great antidote to terror and Billy Bob sure made us laugh a lot. I really felt safe driving with Jim Carr and enjoyed our drive talking about all sorts of things.  SEASONED ROOKIE: What did you like the least?

MOM MURPHY: I don’t think I have an answer for that. No, wait I think it’s coming up to the top of a hill and not knowing what is on the other side. SEASONED ROOKIE: What surprised you the most? MOM MURPHY: How much I enjoyed it as you know I really had my doubts, especially after seeing some of the videos of your last trip. SEASONED ROOKIE: Well, as for MY favorite part of the trip What did you think when we took a vote and had you drive the rookie trail on your own? Were you confident? Scared? Nervous? Secretly wanting to try all along?

MOM MURPHY: At that point I put everything else out of my mind and just drove. I have always enjoyed driving and this was just another way of doing it. I also knew that you would not let me do anything that you felt I couldn’t so that made me feel very secure. I also know that I can do anything that I set my mind to and if I had not wanted to do it I wouldn’t have come in the first place. Joyce, co owner of a trade show exhibit company, is getting ready to celebrate two milestones next year: 20 years in business and 35 years of marriage.  In her spare time she enjoys reading, gardening, and the opera, and now off-roading.

SEASONED ROOKIE: Every rookie tells me that their first day out on the trails gives them a new understanding of something that applies to their day to day life — what is it that you brought back from the Badlands with you that day?  MOM MURPHY: Fear clouds anticipation so that instead of looking forward to an event, you begin to dread it. I have to keep my mind open. SEASONED ROOKIE: Any chance we’ll ever get you out there again with us?

MOM MURPHY: Oh Yeah! Of course it has to fight for time with my garden and other weekend activities, but I can see another run in the future.  SEASONED ROOKIE: Wow I expected quite a bit more resistance than that! Do you feel this is a safe activity? Do you feel differently either way before and after experiencing it? I was really taken aback by the incident with the Jeep group. I’m glad it was after I had already driven myself so that I had that experience behind me. I do understand that the driver has to have control and you have to follow the rules of safety at all times and take no short cuts like not putting the car in gear. I felt very safe driving with both you and Jim knowing that you are both very skilled in handling your vehicles.

Rookies Note The Jeep Group incident is a perfect example of something that could have been so much worse if not for a lot of unexplainable coincidences of timing. To summarize, there was a group in front of us on the blue trail, one person on the bottom of the hill attaching some tow straps, and another at the top of the hill. Somehow, the Jeep at the top rolled down the hill with nobody inside emphasizing the critical point that NOTHING can go without being double-checked on the trails even something as simple as pulling the parking brake up. Somehow the man at at the bottom of the hill was able to jump out of the way just in time but the results could have been far worse. Many of our crew ran to assist, thankfully no medical attention was needed. Be Gallant, not Goofus. Think before you do ANYTHING on the trails.

SEASONED ROOKIE: What knowledge did YOU bring along? I don’t think it’s fair to assume that you just hopped in the truck and drove all by yourself totally unprepared.

MOM MURPHY: I first learned to drive on an old tractor when I was 14. Of course, you took me out in your little Volkswagen years ago and taught me to drive stick shift in the same parking lot I used to take you when you were a baby driver. That’s all I brought with me. SEASONED ROOKIE: What were you thinking to yourself as you climbed over your first few obstacles? MOM MURPHY: Can you print that? SEASONED ROOKIE: Now that you mention it I do recall some of the language being unmotherly Maybe Ill just fill this in later and make up a story that sounds better. How does that sound? MOM MURPHY: Good idea. Dont forget.

SEASONED ROOKIE: I wont. Call me before this goes to press and Ill whip up something good. Anyway, what did you tell your friends about the trip? What were the reactions of those you told? MOM MURPHY: There was no real shock, which I suppose is comforting. Some have said they would like to try it, while two gals said “why?”

SEASONED ROOKIE: Prior to this, what was the most recent adventure you remember having along these lines? MOM MURPHY: I guess the last big adventure was snorkeling. I had been afraid to do it because I can’t swim very well, but it turned out to be great fun and they had a hard time getting me out of the water.

So, all in all the trip was a success. Not only is mom still speaking to me, but shes also looking forward to joining the iZook crowd sometime soon for another run. As we know, the Seasoned Rookie motto is      Hang on, it looks like I have a text message