Well, it’s great to be back. We have a whole new year here, Larry says it’s going to be called ‘2002’. Too many articles spanning the globe have focused on New Years resolutions and such, so I’ll just skip that and get to the next major holiday.

For a lot of us, winter has been going on for a few months. Time to spend a few bucks and head to the car wash. Blast all that salt from the frame and fender wells. Even if your rig is starting to rust, this could at least help to slow things down.

But for many Zookers, there is that ‘other’ love issue. Around this time of year we may be expected to channel our funds towards things like a dozen roses, a nice dinner, or other silly romantic stuff like that. (editors note: Be sure not to miss the installment of The Seasoned Rookie series entitled ‘Why AM I still single’).

It seems that somehow there must be a way to pamper your Zook, and at the same time appease the loved one. I had hoped to have a list of suggestions, ranging from humorous (“look honey, I bought you a Spydertrax emergency brake kit so that you won’t have to worry about me when I’m on the trails”) to mushy and cute (“Sweetie, surprise! I ordered vanity license plates that say our initials”) to the downright wrong: (“What are you talking about? That’s on March 14. Check out this new engine I just bought!”).

However, since these articles are archived and my ideas may come back to haunt me at a later date, I’ll jump right into this months Featured Rookie.

Steve Luchak is a 20 year old student at Texas A&M and? Well, I’ll let him tell the story. Roll the tape!

SR: Steve, why don’t you tell us a little bit about yourself. Where are you located?

SL: Well, I’m from a smaller town in Texas, pretty much right in the middle of Dallas, Austin, and Houston. As you said before, I’m currently studying at Texas A&M.

SR: How long have you been zookin?

SL: I got my Zook back in May of 1999. It’s an early style JX, with the round dashboard. When I got it, it was completely stock, very rough looking. Whitewall tires and a fiberglass hardtop. As soon as I bought the truck I hopped on the internet looking for Samurai sites and, well, that was it!

SR: What’s the offroading climate like out there? I mean, is it mostly city scene or can you drive for a few minutes and be ready to lock the hubs?

SL: Out here, you can drive for a few minutes and be out in the middle of nowhere, but even that doesn’t give you a whole lot to work with. There’s a river a batch of us will go to every so often depending on the weather. That usually gives us something fun to do.

SR: You said “we,” I take it you’ve found a crowd to wheel with?

SL: I belong to the offroad club at A&M, a lot of people from the club will go out there on various days for fun, then we have the organized runs too.

SR: Are there many other Zook owners in the A&M crowd?

SL: I’m the only one, actually.

SR: Going with the Texas stereotypes, How do the guys there treat you in the land where bigger is always better? 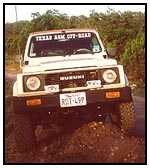 SL: For the most part they think my truck is pretty cool ? I don’t have to deal with too much harassment for driving a small imported 4×4, but what I do get pretty much comes with the territory. To be honest I think I bring most of it upon myself, but it’s all in good fun. I will say that I’ve been getting more respect lately since I did the modifications.

SR: That’s pretty cool. What made you decide to buy a Zook though? You mentioned earlier that Texans like big American-made trucks. Why the little Samurai?

SR: This sounds like an interesting story? What’s the deal?

SL: Well, about six years ago, we had some land, about thirty acres. A Jeep is almost too big for the terrain out there; we couldn’t fit through the narrow brush and stuff. At around that time, my uncle brought down his Samurai when he came to visit, and it was just the right size. Then about, oh, three years ago, my grandfather bought one out of the blue. I told him that if he ever wanted to get rid of it, I’d be glad to buy it from him. About two years later he switched to a Sidekick so that’s when I bought the Samurai that I have today!

SR: Did you have any second thoughts about the lil’ Zook at that point?

SL: Naw. I pretty much knew what I was getting into at that point. Over all, I’m glad that I did get it because I’ve had the opportunity to learn all about the inner workings and such ? from the motor to the electronics to the transfer case, all that stuff. I’ve always been interested in that kind of thing but never had the opportunity to get into it. It’s hard for me to figure stuff out unless I can take it apart.

SR: (laughs) You know, I think that’s something you and I would have in common. I still remember at an early age mom came home one day wanting to know why her electric mixer was all taken apart on the kitchen table. That’s great that you have the skill and desire to dig into things like that. It’s almost a required mindset when you end up on the side of the trail needing to get home and all you have are tools.

Tell me, what all have you done to your Zook since you bought it?

SL: To be honest it’s getting to be pretty close the end for a while. I’m going to install a Thorley header soon, then spend some time working out the little bugs that have been bothering me.

SR: What do you have by ways of performance mods?

SL: I’ve got a two inch Calmini shackle reversal and 30×950 tires. I think the best modification I’ve done though is the transfer case gears (the Calmini Rockcrawler set). I was able to do it myself and figure out how the transfer case worked with the shift and pushrods and all just by taking it apart and replacing the gears. It was a real hands-on learning experience.

SR: Like you mentioned before, that seems to be the kind you like best! What about modifications on the inside?

SL: I’ve switched over to an electric fan on the radiator, and I’m still trying to adjust it just right. For me it was better than the stock fan since my fan clutch went out and I would have had to spend over $100 for a new one, but I found the electric for only $60. I think it cools better than the stock fan, but I think it runs more often than it should. This might be something else, like a clogged radiator or something.

SR: Sounds like the beginnings of a big project there, one thing leading to another.

SR: It seems like you’ve been around quite a bit. What are some of the less-than-happy moments you’ve had with your truck?

SL: The most frustrating would have been last April. I was driving down the road and suddenly, Boom! The whole thing just shut off. Nothing would work except for the horn, and I mean all the time. If you turned on the headlights, the horn would blow. Do anything really, and the horn would blow.

SR: Out of morbid curiosity what would happen when you pushed the horn button?

SL: Absolutely nothing. (laughs) I searched for about a month before I finally found that it was the fuseable link, which should have been the first thing I checked. After I found that, everything seemed fine, lights worked and all, but then when I turned the key on I blew out the ignition fuse. Searched for another 2 months trying to find the short in that circuit until I finally figured out it was the ECM (computer unit.) For some reason, the new alternator I installed was putting out too much current and fried the computer. I was lucky enough to cross paths with someone who had one lying around after swapping engines, which is good because those ECM’s are expensive.

SR: How about ‘death defying moments’, do you have any good trail scares or have you stayed 4 on the ground so far?

SL: Well, I try as much as possible to stay out of those sorts of situations, just because if anything major does happen I know I can’t afford to fix it so I’m playing it safe for the time being and trying to keep the wheels on the ground.

SR: I think that’s something we should all aspire for. (laughs) So is Zookin’ as we know it more of a lifestyle then, or just a weekend hobby?

SL: I think that mostly depends on the time of year. In the summer time it takes up way too much of my spare time, almost a constant thing. During the school year I try not to think if it too much though ? I have those other priorities that I need to take care of. It overflows a bit into my daily life, just not all the time.

SR: Well, Steve, it sounds like you really enjoy what you’ve got going here. Good luck at Texas A&M, and I hope to see you at ZookiMelt 2002!

If you would like to be the Featured Rookie in a future issue, contact Murph and we’ll talk!