How to set up a transfer case for 2WD-Low

On the 2WD-4WD rod there is a matching indentation that the center ball (between the two rods) falls into as you shift into 4WD, thus freeing the High-Low rod to move. Making the change only requires removing the center ball between the two rods. Of course getting to that ball isn?t so simple. You?ll need to remove all three drive shafts and three mounting nuts, drop the t-case, and remove the front and main covers. When you?ve gotten that far, removing that center ball will seem very simple.

After the modification, here?s what actually happens as you shift:

OK, I can feel your eyes glazing over as I type this, so let?s try some pictures: 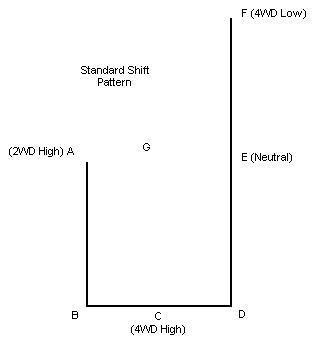 Starting at A, shift down to 4WD-High, B. Anywhere from B-D is 4WD-High. From D up to E, Neutral and then to F, 4WD-Low. This is the standard ?J? pattern as displayed on the knob.

Note: With this pattern displayed on the knob and the transfer case in pattern #4 (below) a thief would be hard-pressed to figure out why the vehicle wouldn?t move. (Call me if you don?t get why. Words and pictures can only explain so much.) 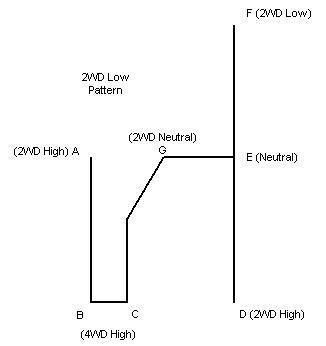 New available shift pattern to get to 2WD-Low

From A shift down to B, 4WD-High. Then feel for the middle of B-D and shift up at C. At the top, G is slightly to the right. This is 2WD-Neutral. The front wheel drive fork has been disengaged and the High-Low fork is in Neutral. Slide over to E and then up to F for 2WD-Low. 2WD-High is quickly available by pulling straight down to D if needed in a hurry. But you will not be able to return to the normal shift pattern until you go back via E, G, C. 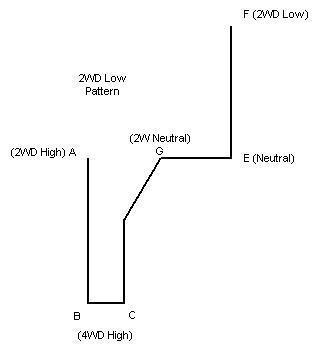 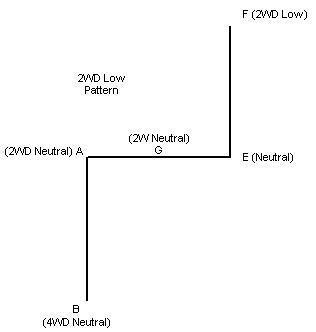 Another possible pattern after in 2WD-Low

If when coming out of 2WD-Low, F, and then shifting across in Neutral, E, you go all the way over to A to the original 2WD-High spot, without going down to 4WD-High area via G, C, A, you?ll end up with 2WD-Neutral and 4WD-Neutral along the left side. You?ve left the High-Low fork in Neutral once you returned to A and are then just shifting the front wheel drive fork in and out while in Neutral. You have to go back via A, G, C, to get back to the Standard ?J? pattern.

Note: If you leave it at A a thief probably wouldn?t be able to figure out why the wheels don?t go. They might be able to figure out how to get to E. But they will definitely be confused based on the pattern displayed on the knob. You have to know G is there to kinda feel for it, otherwise it slips right by without a hint. Let?s say the thief does figure out how to go across to E they?d still be in Neutral. Lets say they even figure out how to go up to F, which is still 4WD-Low, they couldn?t go very fast if you had a Rock Lobster installed; giving a top speed of 12-14 mph. Kind of a neat anti-theft device.