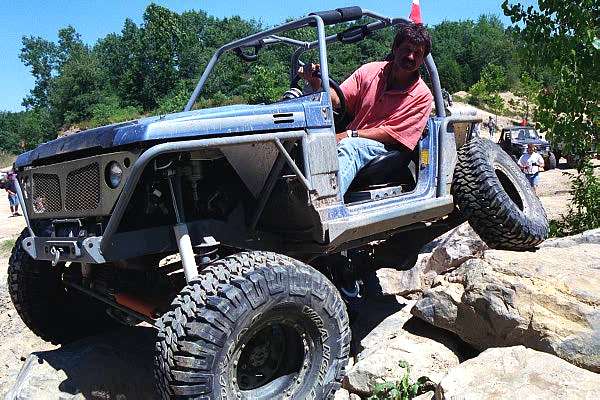 With: Larry and Terrina Harris

Larry and I have come to the conclusion that if it can go wrong it will. We tried to complete in 6 months what should have been a 1 year project. Seems that everything involved in this build has had to be modified to work for our application. There is one noted exception. The Shrock Works Front Bumper went on without any inference or problems. This is one piece of equipment that was designed to work and play well with others.

Way back in January we pulled the Samurai into the garage and started a scrap pile. Everything but the engine block and body went to e Bay.

We started fresh with a new hybrid rear axel from Trail Tough) getting rid of the 5.38’s for a set of 5.12’s. We turned it into a full floater with Subaru front calipers. Had to modify the spring pads to fit. 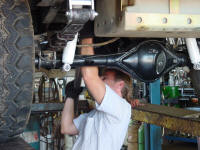 Put the transfer case back in after putting on a new front output section. It was torn off during the roll over last year. Came out the next morning and all the oil was on the floor and not in the case. Damn, there is a crack some were? Pull the case back out and inspect it. Yep, cracked at the passenger side mounting bolts. Dig through the parts pile in the back yard and find a case rear section. Go to pull the arms off to mount the Might Kong. Yep the bolts break off flush. Drill and tap and the case is ready to go back in. 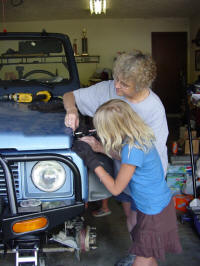 You have seen pictures of the Aluminum  Dash (from Petroworks) going in. It looks awesome. Made a few mistakes in the wiring but they were minor. Put windshield on with a new fold down kit. Great, the dash does not seem to work with the fold down kit. Wiper motor does not fit when going up and down. Pull the motor for now. Will have to resolve it later. 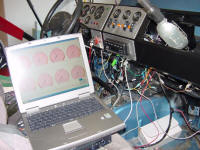 The day has come to start the engine! I hook up the lap top to the computer hit the key. At least it turns over, won’t start but it does turn. Check it and there is gas coming out of the throttle body? Great we have injectors leaking by. Remove the fuel lines and hook up a co2 bottle on a regulator. Pump it up to 20 psi, close the bottle and the pressure goes away? Open the throttle body and try again. Well there is the co2 gas rolling out. Yep bad injectors. If the truck does make the Melt it will be on a Weber. 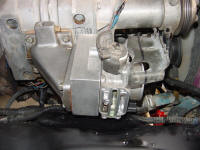 Two of our supporting vendors have made heroic efforts to get parts to us. Spidertrax had the PRP factory send the seats to us direct. They are awesome! The prototype seat 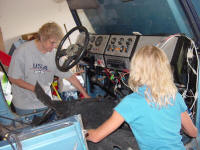 mounting kits are in shipping, are they going to make it in time?

With the roll over last year out Petroworks sport cage was two inches short on the drivers side. Thank goodness it was and not Larry’s head. It took forever for the manufacture to ship them to Petroworks. They are also in shipping. So in addition to some major pieces missing we have a ton of little things. Heck the batteries still need hold downs. 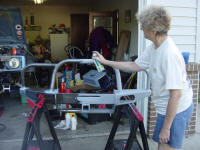 Our maiden voyage was to the muffler shop. Lance (owner) of Hanks Muffler installed a fully welded  system Thursday late. If you own a Samurai or another vehicle and you need exhaust work take it to him.  We let very few people work on our Samurai, Lance is now on that list. You would not believe the quality of his work. Look for an article after the Melt.

One of the projects that did go well is the custom GPS system. The truck might not run but we will know where we are sitting.

Back to the garage… Not enough hours in the day or now at night!

Will it be finished???