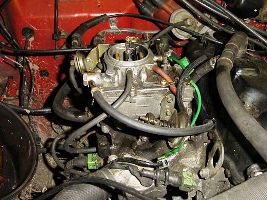 I was surfing the Internet on the subject Suzuki Samurai technical and I found this article on swapping carburetors originally written in Dutch.

As most of us know, the stock carburetor of Suzuki is a big pain in the @$$.  I read this article over and over, and the plan occurs to me to do the same.  I could have bought the new carb from a salvage-yard, but in Holland we have an ad-site, called Marktplaats, Market-place that is, and there I saw the ad from a lady, offering an old Daihatsu Charade that failed the MOT, and the lady found it too expensive to repair this car, so she offered it for sale, for someone who needed Charade-parts. I bid 25 Euro for the complete carburetor, and a few days later she answered by email, she was willing to sell.

We made an appointment, and I went to her village and started to dismantle the carburetor and the choke-cable from the  Daihatsu.  This carburetor has no automatic choke, so I took the choke cable as well. I also took the rubber ring from under the air cleaner, you will need this again.

I knew once I removed the air cleaner top there was no going back for me. LOL!  Luck was with me, for the Charade-carburetor does fit the manifold without any changes!  Just a fresh gasket and on we go.

I had to make an adapter piece to accommodate the water hoses.  I took two small pieces of rubber hose, pushed them over the tubes, and over this all goes the water hoses on both brass tubes, see the figures 1 and 2.

To install the choke cable, use the rubber grommet in the firewall to push the cable into the motor-compartment and on to place the Daihatsu choke cable in its original place. Better not cut the cable, a wide loop under the rim of the window makes the cable to operate smoother.

The stock-carb is mounted with long bolts going through the carb housing, this wont work with the Daihatsu carb, you have to take 4 M8-studs, about 30 mil long and screw them in the manifold.  Then place the carb in place, accompanied with the new gasket, lay under each nut A ring, and you will find that the nuts on the left are easy to access, but to reach the others you have to remove the stuff that is in the way.  The nut on the back is easily accessible with a mini-socket wrench. Just be patient and fiddle a little, it will work.

After that you have to wiggle the carb breather hose back in place. It is narrow, but it will fit. After this, it is a matter of connecting the petrol line and the vacuum hoses.  The petrol-intake on the carb has to turn 180 degrees around to accommodate the petrol line coming from the back.  On the engine-side on the foot of the carb is the advance of the ignition, 2 and 3 on the picture goes to the manifold.  What is left has to be closed off, using a little piece of hose with a little bolt screwed in to it.  The Samurai air cleaner will fit like if it was the Sam-carb, with the Daihatsu-rubber ring under it, so after a good few hours your done!

Then there is the great moment! 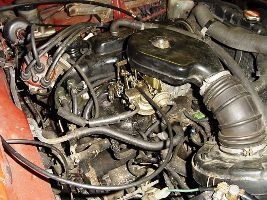 Pull the choke halfway.  After a somewhat longer crank to fill the float bowl with petrol the engine starts, and runs surprisingly nice, just like any other car! Do not turn any adjusters, let it go until completely warm, then make if necessary adjustments. Most cases the only adjustment to make is the idle speed, 800 rpm.

Then your first drive, you will be amazed! No more hesitating, no more of the problems with the Sammy carb!