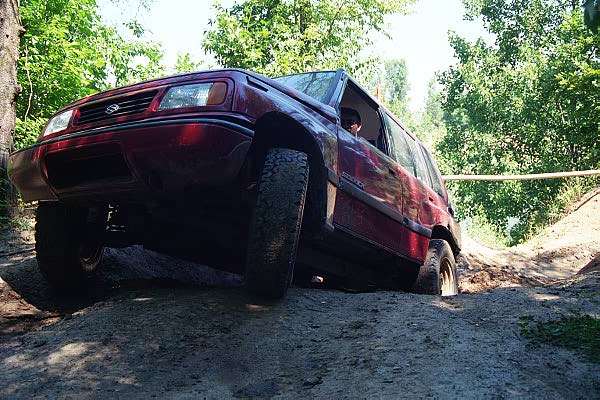 This is the second part of a multi part article. Many of the attendees have given their thoughts on the weekend and we share them here with you.

The Badlands ORV park offers all the off road terrain you could possibly imagine, and we were to experience most of it in one day. The morning get together for the 1st annual Zuki Melt went very well, we were introduced to many new friends. Many of these Samurai owners are from the Suzuki Mailing List. The Badlands is a  privately owned off road park located at Attica, Indiana. It is owned by Troy Myers and his brother. This park contains 700+ acres of the most varied terrain you could possibly ask for. There are wooded trails, sand, water crossings, gooey deep mud, and lots of rocks. Under Troy Grahams guidance we would try it all.

Troy Graham was to be the trail leader. He pulled us all together into line and we were off into the park. Just inside there is a trail that leads off to the left. It is a steep up hill with several off camber turns. This is going to be a good day! The park has changed a great deal since the last time we were here. Passing through Spring and now into Summer the trails that were tight before are now almost impassable with over growth. Most of the group are running topless and with out their doors. These are the same people fighting off the vegetation  trying to keep it out of the truck. We lost, just ask all the people with poison ivy. The natural surroundings did not deter us from our goal of conquering the trails this day.

“…Got a little poison ivy or something too. I didn’t do too much damage to the rig, cracked a flare, bent my steering linkage a tad and the bottom springs moved out some in the front spring pack. All fixed up now except for

Well, in some cases the park almost won. There were several cases of body rash due to contact with the local infrastructure (trees) I think Dana was first contact. This was followed by many others. John was coming off a hill that you have to have a great deal of momentum to make the crest. Once there you had to hit the brakes hard for the very steep descent through a tree infested loose dirt trail. John was almost to the bottom when the truck moved to the right despite his heroic effort to turn the wheels the other way. Smack, he is into the tree with the right front fender, hard. Good news is he missed the (newly-installed) SJ-410 grill. Bob in the Bee hooks up to John’s truck and pulls him back far enough to turn the truck clear of the tree and off we go to the next adventure.

Bill with his “No Fear” trail running style showed us how the Illinois boys do mud. He got most of the way through the pit when it was like someone called out “all stop”. There he sits with a big smile and mud running into his shorts. Bill aka  Air Zuk has a one of the most exciting methods of beating a trail… “Just go for it!” We were able to watch this many times during the day, and it works. We all had a great time watching them fly through the culvert coming out of the creek. You knew it was going to be good when you could hear Matt grab second gear on  his third trip through.

So far we have been into very tight twisty woods and a little bit of mud. Still one more challenge lies ahead. For many of us this will be our first taste of… Rocks. The Badlands has a fantastic rock garden. It may not be Moab but it is a heck of a lot of fun and very formidable. As with any group there are some that make it look easy and I am sorry to say the pictures do not show the angle or degree of difficulty in this rocky area. There are rock ledges that as you drive off all you can see is sky. You have to trust your spotter here. One area under the cliff is relatively short but it will test your puckering skills as it feels like your rig will endo at any time.

While playing in one of the many areas of the park a call comes over the CB from Badlands base. Help, a Land Cruiser has broken a winch cable and is stuck in a killer mud hole, but good. Troy knows the area, it is where we are headed next. He wisely decides not to take 14 Zooks of into this area until he can see how far the LC is in. Not much room to turn around. In fact most areas if you drive in you better plan on making it out the other side. So Troy recruits Bob and Dana (both with 8000lb winches, lockers, Swampers, etc) and heads off to the rescue. Being good little Zook owners we are off for more mud and rocky creek foraging under the tutelage of Claude, (now driving Troy’s rig), the head cheer leader, I mean trail leader. He leads us back into the creek, which is full of logs and very large rocks, and of course they are all underwater. Makes for a very interesting run. Watch your diffs here, or you WILL be using 2WD for the remainder of the weekend!

The Rescue “…There’s a 3+ trail labeled “Orange”, that is home to the King Kong of Midwestern Mud holes. Two guys in a fairly well equipped TLC decided to attempt it on their own and found out the hard way why you “Never wheel alone!” They had buried their vehicle up to the top of their 32″ tires a good ways into in a syrupy, slimy, hole, then broken their winch cable on an 8274 Warn trying to extricate themselves. When we arrived, Troy Myers was trying to winch them out, but in the process, got his TJ (on 35s!) stuck in the same hole.  What ensued was a rather comical hour-and-a-half-long succession of vehicle, strapped to vehicle, strapped to tree, etc, attempts to get everyone unstuck and back on terra firma. In the process, Bob damaged the right rear corner of the Bee, and came *that* close to laying it on it’s side. And Dana managed to frag a u-joint, again. I forgot how much I hate mud ;’)” – TD (Troy) Graham